It seems that anti-capitalism videos are trending among young people on TikTok. 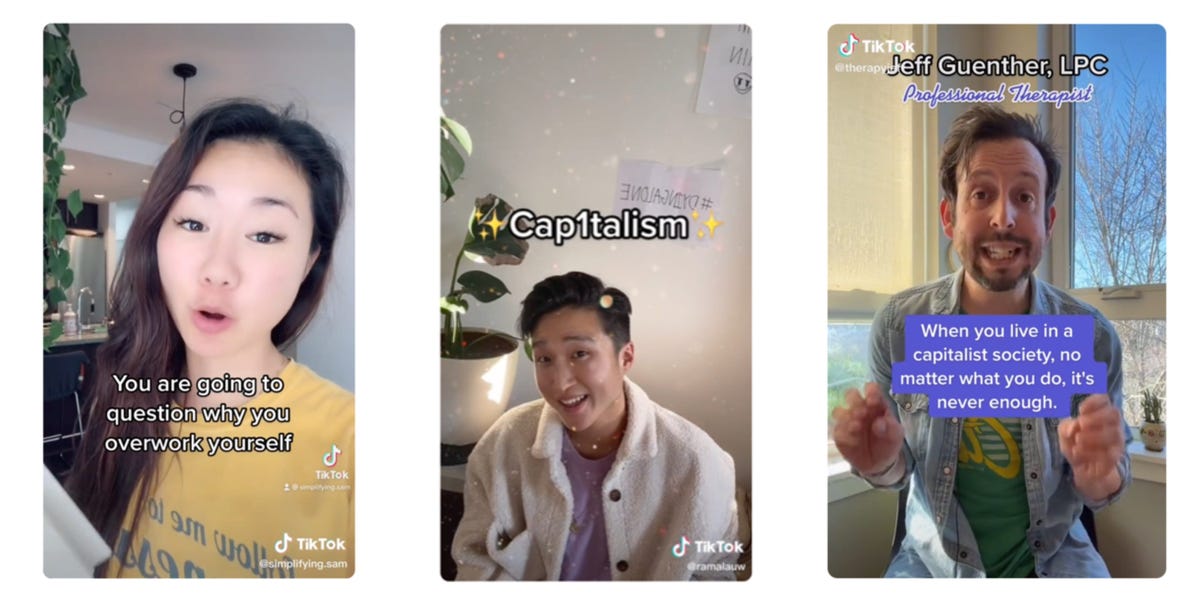 Anti-capitalism is flooding TikTok as young people question a life that...

Work is life for many Americans, and the obsession with endless productivity is taking a toll. Many have taken to TikTok to explain their frustration.

Is there anyone out there who likes making TikTok videos? Would be a great opportunity to make short creative videos to raise awareness about alternatives like a participatory economy.

A few years ago, my son, who is in his mid 20s, told me that when he was in high school, the anti capitalist sentiment was quite high. I was quite surprised. He also mentioned that this was expressed quite a bit on the Tik Tok platform.

In addition to making videos, how viable would it be to communicate directly to Tik Tok account holders, make them aware of Parecon, and get them to spread the message?

I don’t know much about TikTok other than it could have a lot of potential for us to reach a younger audience through making short creative videos. We may need to recruit some help from the younger generation here. Might your son be interested?

I could tap into his insights regarding the platform and what his suggestions would be to exploit it to our benefit. I’ll give that a try and get back to you.

On a side note, regarding the fundraising question you asked a little while ago (it was you right?), ever consider crowd funding for a project? An example project could be to purchase 100 acres of farmland and run a Parecon on it. It would be like setting up an intentional community. We could use GiveSendGo as a platform to raise funds or alternatively, interested individuals could apply to be selected to participate in the “experiment” along with an application fee. The fees would cover the costs of getting the project up and running. I’ve seen something like this when people want to sell their home where applicants submit a “story” to justify why they should be selected along with a fee. What do you think?

Setting up an intentional community along participatory society values is a nice idea. For me, the issue with anything that ambitious is how to raise enough funding to buy the land, considering how inflated land prices are. Do you know any examples of any group that has ever raised money like that through crowdfunding? With 100 acres of land, I think we’re talking about a lot of money, right?

I think crowdfunding might be a good approach to try for something like making a video documentary or some other creative project. Not sure we have a big enough community base though.

Those are definitely valid points that you raise. I don’t a specific example unfortunately. It would require a lot of creativity to come up with an idea/approach and we need a large enough target population who would think it would be a cool idea to embark on this kind of journey.

Fortunately ICs are not new ideas and i believe a lot of people aspire to live in them. For example there is another group that I’m in and every now and then someone brings up the idea of buying a piece of land and living a better life. Given the high cost of real estate, this created both a barrier and an opportunity at the same time. I think gone are the days that the younger generation will own a home and pay it off by retirement age. And people realise this.

There must still be places where farmland is cheap in the US? I live in Canada near eastern ontario, and it is an economically depressed area. I’ve seen a 7 acre property with a home going for $300K CDN. I think for a project like this, we would need at least $2M to get it off the ground so as to have enough money to support the ‘colonists’ over the years.

Why not start small, like raising for a video, which could either be generic or spun in such a way as to promote the IC idea. This would be phase one. Phase 2 could be another crowd funding that aims higher, like buying the land and equipment and starting a small handful of people. We turn it into a ‘reality show’ of sorts, but not the tacky kind Hollywood does but the type YouTubers do for a project they are working on and they want to share with others. These sorts of things capture peoples attention. Phase 3 would then build on phase 2 by doing another crowd funding. This time it would be to expand the project and bringing even more people and buying more land.

It’s a bit ambitious but i think by taking it in small incremental steps it would have a greater chance of success. The only way to find out if our community base is large enough is to test it out. A one page summary of the project might be a good start. Then circulating it around to see who in our community would support it and what groups other than our own would be interested. Within our own community, our members have connections in all sorts of places. These networks could serve as extensions to our own and after testing the waters, we launch phase 1.

As a first step, why don’t you create a separate thread on this idea? We can see if any others are interested. Our online community forum is small but this might be a good discussion to bring to the Real Utopia: participatory society website (https://www.realutopia.org) which is a broader network of participatory society supporters.